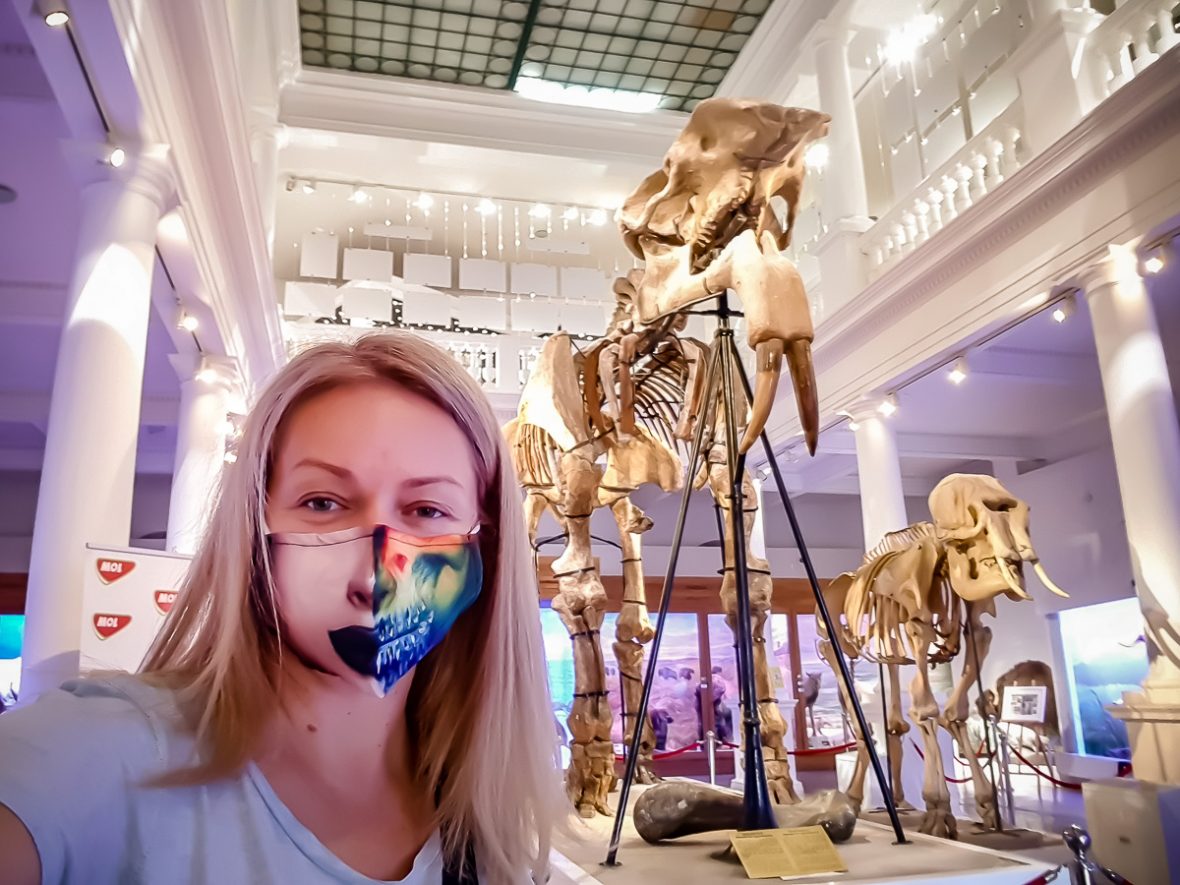 I was going to buy some eclairs, when I stumbled upon… the Grigore Antipa Museum!

The door is open, there is no queue, the giraffe is still whole J, I have some free time, so I decide to enter! I haven’t seen the museum since… the Cretaceous.

And, in order to be correct to the end, in addition to the ticket, I pay another 2 euros, that allows me to take pictures with the phone.

It’s hot. A poster explains to me why: the air conditioning is turned off for safety reasons, so that this virus that has confused our lives does not spread.

I put on a mask that has just arrived from China, as if especially for this visit and… I am on my way!

There are only a few people in the museum. Some parents with children and two young students (that’s for sure, as they paid 1 euro each at the entrance).

I take the direction indicated by the arrows, entering areas of the planet that I either saw in reality or I dreamed of as destinations…

Where they are not stuffed or put in a jar, the exposed animals may also be out of plastic… Or whatever that is. This is a formula that allows the visitor to see the mammal/bird/fish in full size and… in a very good shape J.

I like. It’s clean, civilized, nicely organized. (I understand that it is organized by international standards, since it was renovated.)

And, even if no monitor works, no plasma, even if the digital displays are closed due to COVID, you can read a minimum of information at each showcase. Or test your knowledge gained during school and during your trips around the world…

There are interesting showcases with mannequins, representing people from different periods in time, from different parts of the world. But I read breathlessly the information about Antipa himself. Grigore Antipa.

Man invented the “diorama”. That is, he organized the museum by arranging exhibition spaces in which the creatures from a certain area of the planet are gathered and placed in a natural interaction and around them a decoration specific to that area is created (painted background, props, lights put on wisely, to further amplify the sensation of habitat).

Basically, there are some 3D sets that show a corner of nature, a sequence from the life of those animals. They show reality. Life in the Carpathian Mountains or the Danube Delta, an event in the Baragan plain or, further, from the North Pole, from the desert, from Antarctica, the tundra, savannah or prairie.

This way of exhibiting, the diorama, revolutionized the world of natural history museums, at the beginning of the 20th century! It has been taken over by many museums in Europe and North America.

Super smart this Antipa guy! I almost didn’t understand everything that he was in his life: a biologist, a zoologist, an ichthyologist (whatever that might be), an ecologist, an oceanologist and, above all, an university professor! And he also ran the museum for 51 years! Man, when did he have time for everything? He only lived 77 years (1867 Botosani – 1944 Bucharest).

Note: I googled it and found out what an “ichthyologist” is – he’s a fish specialist. No, not at the restaurant, not the one who sees if they are well cooked J.

After I was like the calf looking at the new gate at everything this man had done, I came across an ox…

This is a muskox. Damn it! This is the one who gave me headaches in Greenland, because I didn’t know how to translate it, when I ate it J)).

I also discover the… Trophy Hall. This is how I would call it, considering that some animals that were once alive (at least some of them) stare at you from all the walls.

A gentleman restores Mr. Elephant. With great care, he adds some material to the places where it has been eaten by time.

It clearly says “exhibit under restoration”, so as you don’t think that man is tickling the elephant to make his life in the museum more pleasant.

Do you think that here, when the sun goes down, the exhibits come to life?… J))

I’ve been hearing that phrase “life beats the movies”, so I’d kinda stay around until closing time. They don’t have a T Rex here, but they do have a fossil elephant. So what, can’t he run around inside the museum??

I’m already looking at exhibit number 7 – left tibia from a steppe elephant. It’s perfect for throwing it at the giant in the central lobby so that the night’s fun may start!

To find out what his skin (or rather, his bones) is worth, I read what is written next to it.

Very cool!!! This skeleton is the largest and most complete in the world, being the standard specimen, after which a new species for science was described! And so it has the damn status of something “unique in the world”!

I greet him respectfully and move on to other rooms.

The area related to anatomy makes me do a small analysis… I feel like touching my liver, to see if it is still in place. Thank God I don’t check others too J.

I pass through the crystal room faster. If some Brad Pitt with a diamond in his hand were waiting for me, I would have spent a lot of time here…

Insects keep me there only as long as I can learn a few things (for example, what a wasp nest looks like when it’s not just a Romanian movie name).

Anyway, I’m in no hurry, seeing that I don’t meet anyone in the halls. This is luxury! It is as if I have rented the entire museum just for myself!

The skeletons in all the halls are starting to make me shiver. It is a good moment to think about the immortality of the soul…

And, to complete the image, next to a skeleton there is a large panel with COVID rules, in case you forgot the danger you might be in:

I go down to the ground floor and then the arrows take me to the basement.

Judging by the exhibits, it seems that I enter the Delta and the Baragan, then Balta Brailei.

And, when I had definitively lost all hope that my most vivid memory of the Antipa Museum had disappeared, here it is in front of me: THE CAVE!

Well, how could these people have taken out the cave exhibit, the part of the museum that, as a child, delighted me the most! This was the place where I always asked myself the same question: damn, which ones are the stalactites and which the stalagmites??? J (What, do you think I know the answer today?…)

At the exit, I talk a bit with some of the employees, to find out if people still come to the museum. They look at me in a strange way and only when I take off my mask, outside, do I realize that this was the reason… Well, what can I do, I matched the museum: I was a creature J.

And yes, people do come to the museum, I’m told. Fridays to Sundays is the busiest period. (It’s closed on Monday, in case you make plans to come when it’s not full of people.)

Ok, back to work, my lunch break is over. But I’ll be back at 20:00, the closing time and, most importantly, the time when the sun goes down. And you should hold on to see the party that a night at the museum will be!!! I don’t know, however, how I will solve the problem of social distancing… 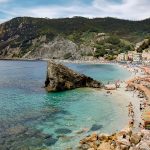 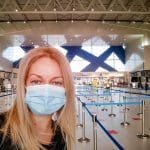 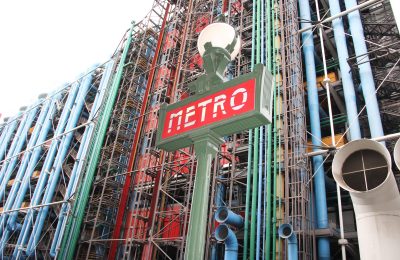 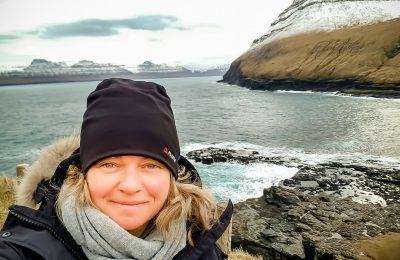 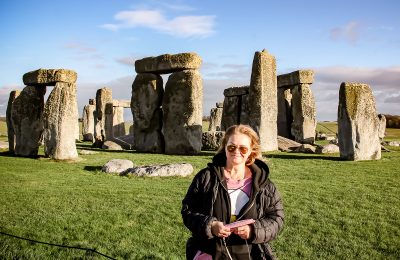